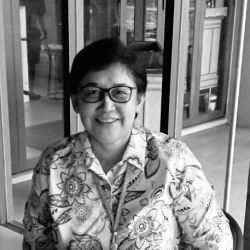 Prior to joining FAO in 2003, she was connected with the Philippines’ Department of Agriculture for 18 years, in varying capacities, and handled the country’s FMD eradication program resulting in free zones being recognized by OIE and eventually establishing the foundations of how a disease control programme should be developed and implemented.

In 2003, she joined FAO to work as Animal Health Officer of the FAO Regional Office for Asia and the Pacific based in Bangkok, Thailand. She held this post for 12.5 years, overseeing animal health programmes (e.g. TADs control, AMR, Emergency Response) in countries of Asia and the Pacific. In December 2015, she left the FAO regular programme stream and returned in February 2016 to assume the role of Regional Project Coordinator on Antimicrobial Resistance (AMR) and managed the regional project on addressing antimicrobial usage in Asia’s livestock, aquaculture and crop production sectors.

Carolyn has returned to the Philippines after ending her FAO stint in 2018. She is the founder and currently the President and a Fellow of the Philippine College of Veterinary Epidemiologists (PCVE). As PCVE President,

Carolyn and her PCVE colleagues conduct courses on Applied Veterinary Epidemiology and work closely with the government and other development partners on animal health matters. She is married to Sol, a veterinarian, and has been blessed with two great sons.