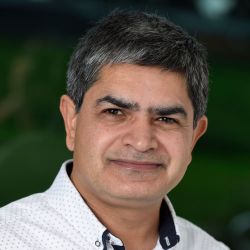 The University of Sydney

Dr Navneet Dhand is an Associate Professor in Veterinary Biostatistics and Epidemiology at The University of Sydney and leads the Asia Pacific Consortium of Veterinary Epidemiology (APCOVE).

Originally trained as a veterinarian in India, Navneet became a member of the Australian and New Zealand College of Veterinary Scientists (Epidemiology Chapter) in 2007 and completed his PhD in Veterinary Science from the University of Sydney, Australia in 2008. His research interests are in Johne’s disease, bovine brucellosis and Hendra virus and he leads several research projects for investigating the epidemiology of endemic and emerging infectious diseases. He has published more than 180 peer-reviewed articles and presented at numerous conferences and seminars.

Navneet has received several awards including the inaugural Chris Baldock Prize from the Australian College of Veterinary Scientists, the Excellence in Online Facilitation Award from the Faculty of Veterinary Science and the Supervisor of the Year Award from the Sydney University Postgraduate Representative Association. He has also received a commendation for his outstanding academic achievements in the field of epidemiology and control of infectious diseases from the Sydney School of Veterinary Science. Navneet was named as the Research Leader in Veterinary Medicine in Australia in The Australian Special Research Report 2020 for having the highest number of citations from papers published in the last five years in the 20 top journals in the field.